(navigate to .dosemu/drive_c folder, edit autoexec.bat to include this line:)

Back in 1988 before Microsoft pulled their dummkopf out of their hintern and released Windows 3.0 you could ALMOST multitask with DOS Shell using task switching. whereby you freeze-frame one MS-DOS program and jump to another one already in progress.

This is what the root directory of my “C” drive looks like on FreeDOS using the 4DOS command interpreter, which replaces COMMAND.COM. I had used this before in the early 1990s as shareware. I actually bought it at the Kitsap Mall in Silverdale, Washington on a double density 360K floppy disk for $4.99 along with many other titles.

For a brief period around 1993-94, stores popped up in malls all over the country selling DOS and Windows 3.1 shareware. Some of the better Bulletin Board Systems (BBSes) would have shareware on CD-ROM which you could grab over your 2400 baud modem. But now we have moved far beyond the era of MS-DOS, and most of this former shareware has either been released into the public domain or has become “abandonware”. In this case, 4DOS is released as unsupported freeware with the caveat that the source code may only be compiled under FreeDOS.

What 4DOS lets me do is set up my DIR command to display files with different colors based on their extension, or whether they are directories, or hidden files, or read-only files, or have the archive bit set. I have all my executables showing up as green, for example, so at a glance I can tell which file to run. And 4DOS lets me set up a short alias for long commands just like in Linux. All the normal DOS commands are there, but with far more features, and many more commands are present, all documented with a help system that pops up when I hit F1. So with 4DOS as my one-stop command-line shop, loaded into high memory, I can move all the little individual utilities like MOVE or DELTREE or XCOPY off my hard drive and reduce the clutter. 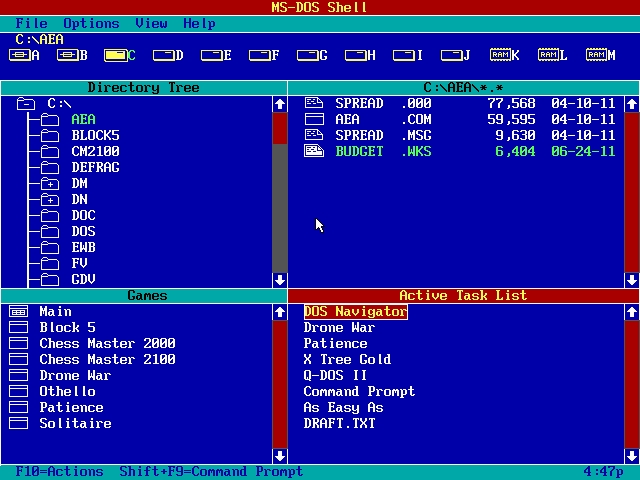 With MS-DOS 4.01 in 1988, Microsoft began to move towards making DOS a little more user friendly. So they created DOS Shell as a more visual interface for people who did not or could not learn how to use the command line. Now folks could click on files and drag them between directories, or select file options from a drop-down menu. It could be configured as a two-pane file manager, with one pane over the other, but there is something about having identical left and right panels that is far more intuitive. No one ever learned to fly over the keys like a virtuoso pianist using DOS Shell like they could using its main competitor at the time, Norton Commander 2.0. DOS Shell also had a menu that could be configured to launch anything. Also, there’s an option to view all the files on a disk, great for finding duplicates.

Starting with DOS 5.0 it contained a task swapper that could switch between multiple programs by swapping the contents of RAM to disk, but this was not true multi-tasking. When a program was swapped out it was frozen. Still, it was far more efficient than closing the program and starting it again.

DOS Shell looks and acts exactly like the file manager in Windows 3.0 under standard mode. So it was quite a little jewel if you didn’t have a PC ready to run Windows, like my 8086 Amstrad with 640K of RAM. It was nice to have something approaching a decent graphical interface for DOS.

By the time MS-DOS 6.21 rolled out the MS-DOS Shell was no longer a core part of the distribution, you had to ask Microsoft for a free supplemental disk to get it (which I did, and they mailed a 5 1/4 inch floppy floppy). Eventually it evolved into the Windows Explorer in Windows-95 onward, and development of the DOS Shell was dropped.

My laptops have enough RAM that I use three virtual RAM disks of 16 megabytes each, and DOS Shell uses one of these to swap programs. So system RAM is swapped to more RAM instead of a hard drive. That makes it blindingly fast. I have my budget spreadsheet and word processor and file manager and some games all active, and it’s almost as easy as having multiple windows open under Windows. Also, this primary color “Superman” scheme is exactly how I like it. 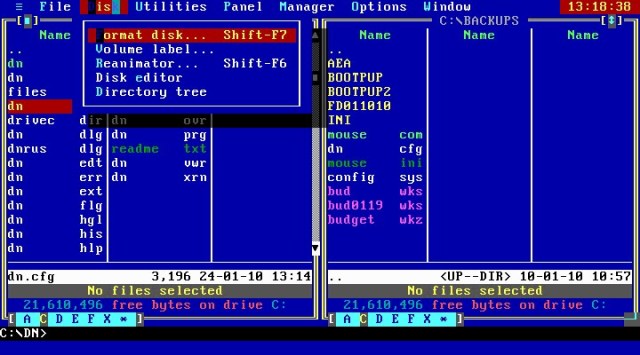 I was using Necromancer’s DOS Navigator for file management in DOS, but there were a few annoying bugs that made it clumsy to use. First of all, the mouse cursor kept getting disabled, requiring me to hit the ALT key, sometimes several times, and jiggle the mouse, and mess around until I saw it again. Second, there was no way to get a DOS command line available at all times, I had to go to a pull-down menu to get to the command line, and there wasn’t even a shortcut available. Third, there was no auto-refresh of a floppy’s file contents when I clicked on the “A” drive, I had to use a key shortcut combination to refresh it.

So I installed the original plain vanilla “Dos Navigator” that Necromancer used as a baseline for his version. Now the mouse cursor is available all the time. The command line is available all the time, just like on Norton Commander and Midnight Commander. The panel automatically scans the “A” drive when I click on it. So with an Orthodox File Manager I can actually use, I set it to automatically PKUNZIP the readme files inside zip files so I can see if the program is worth unzipping. I got more shareware and freeware zipped up ready to install than I have time in the rest of my life to do it. And one of the first things I found was a great 3-D nearby star display program called “3STARS” that is better than anything I found using Linux. I mean this thing is awesome! And things like this makes me happy that I’m digging around in DOS world again. 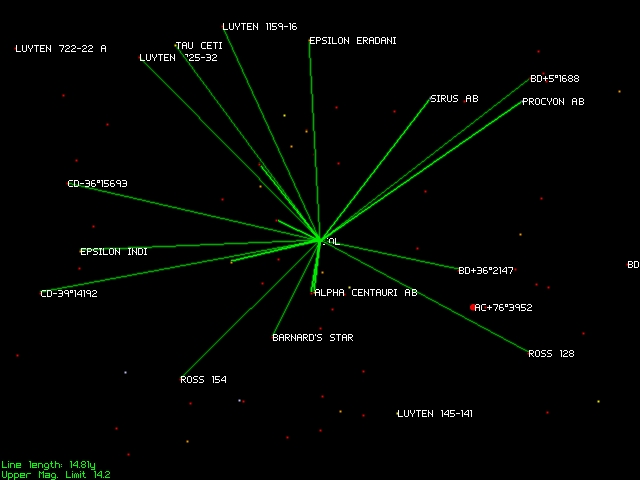